This is Gravinertio, my entry for the CalARTS Game Design Specialisation I’m enrolled in. The task is to design a board game that fits completely in one sheet of A4 paper, for one player with only 2 dices and 1 token required to play.

I’ll be posting the updates as I iterate on the game after each week’s assignment from the course.

I was given the assignment to adapt the game for multiplayer! It’s hard. I’m looking forward to see it evolve (properly) ((maybe)). 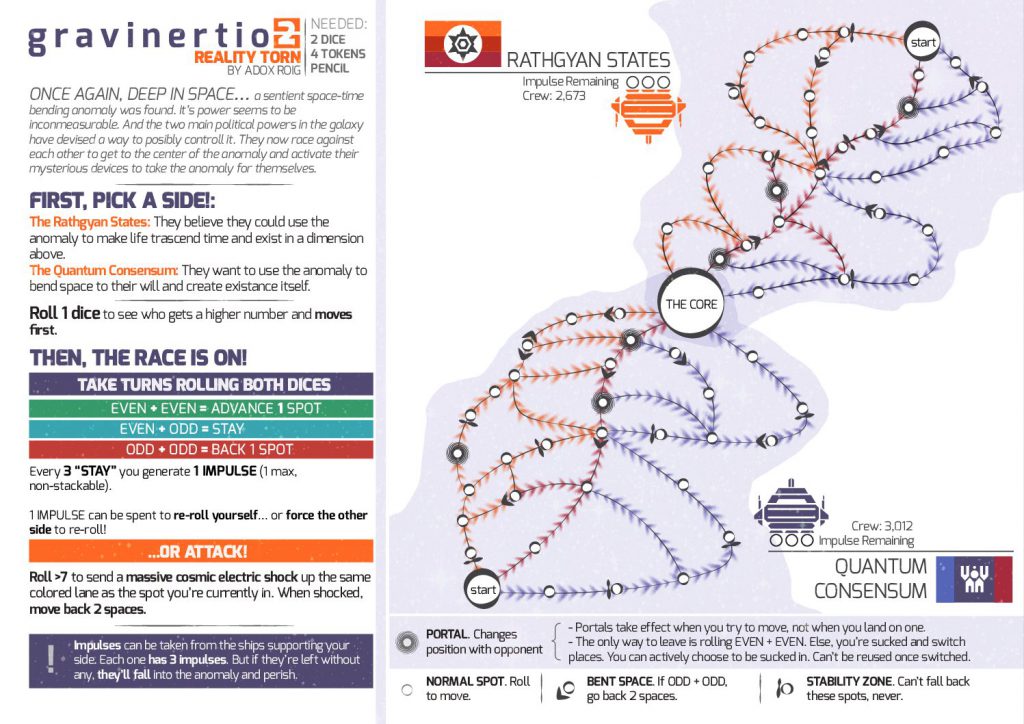 I keep trying to think about the rules of my game design in terms of loop holes and posible misinterpretations, which have been a consistent critique. It’s easy to come up with many different mechanics, but then they have “consequences”.
Oh and I also added color, which another student asked for 😉

I also added a huge “chance” element to the game, since I consider it fun in a simple paper and follow the path design. This comes in the form of the portals, which change the player’s side and can screw over a player who’s been doing well or vice versa.

Changed to a landscape format and now there’s a [minimal] story that relates to the player through gameplay. 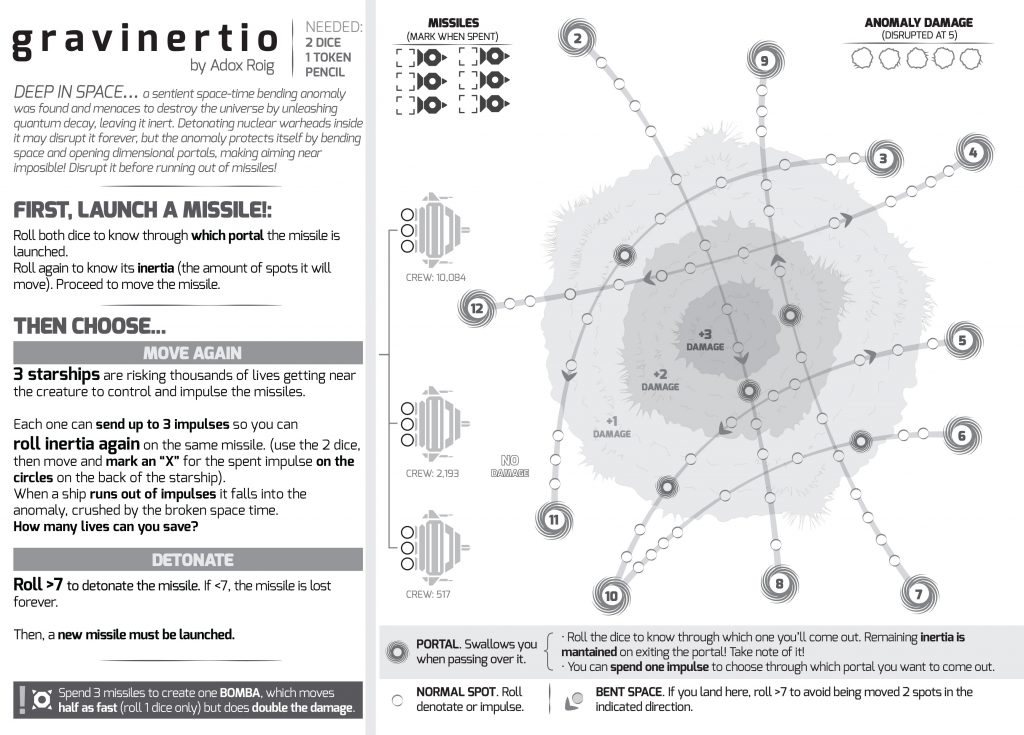 The most useful feedback I had was that my rules were a little all over the place and it wasn’t exactly clear what the player should do to start playing. That’s why I decided to change my game to a landscape format and group all the rules on one side, with the board and the legend on the other.

Also, I used text size variation to make the text less “blocky”, more friendly and to state clearly where to begin, how and present the game loop coherently.

I had a bit of a backstory since version 1 (the part written in italic text on top), but after watching the videos I wanted to incorporate a bit of it into the gameplay (as much as a paper game can). So I came up with an “origin” for the impulses available to move the missile again once it has been launched. Ships full of people are risking their lives by using the last of their starships’ energy to send impulses at your disposal. So now when spending impulses you’re also playing with people’s lives. How many lives do you think you can save? Are you going to build a “BOMBA”? Will you get greedy trying to get to the center of the anomaly to make more damage at the expense of a starship?

So the game changed to “Can you disrupt the anomaly before running out of missiles” to…: “How many lives can you save?”

I believe that this kind of interaction is writer-led, since I’m letting the player take important decisions, but it’s on them if they’ll feel guilty or not.

Updated graphic design to make rules more manageable. Added the “create BOMBA” mechanic. Have fun trying to destroy that space time anomaly! After playing, let everybody know in comments how many missiles did it take you to destroy it… or to fail! 😉 Thanks a lot!

The most useful feedback I received was that the rules were kind of difficult to read/understand/memorise. I realised that indeed my rules were all over the place in my [graphic] design.

So I rearranged all the text. I placed the symbols and a brief description first, so whenever in doubt your eyes can quickly find what you’re looking for. Then besides it used boxes and braces { to expand on the information related to that symbol. Also, I moved the basic movement rules below the Missiles & Impulses box, since they’re related. That cleared a ton of space for the rest of the rules and everything felt less intimidating to read, easier to search for, understandable.

The main change I added was the ability to “fuse” 3 missiles together to create one “bomba”, a double effective weapon, but half as fast. I used basic risk/reward which adds another bit of strategy within the largely chance-driven game.

I’ve been using narration for this game. I have a little backstory on the top of the page (which was there from version 1), but now I changed it to italic text in a lighter shade of gray to differentiate it from the rules. I think that even the most basic games benefit from having the most minimal backstory.

I feel that if I had more space to write more rules (or make a bigger, more detailed map) I could add tons of variations for my rules, maybe even turn this into a multiplayer game. Which leads to me to realise that the nature of your game depends a whole lot on your platform in many ways beyond the obvious ones (board game VS. computer game). It’s important to get creative from the limitations, not in spite of them.

“A space-time sentient anomaly menaces to destroy the universe with quantum decay. Use limited missiles wisely and navigate the disrupted space time to blow it up from the inside!”

This is the original submission for Gravinertio! Before any peer reviews or iterations.

An intense creative who cannot stop doing what he loves.