3 Videogames to play in Autumn / Halloween !

As the popular GIF portraying the Sanderson sisters say…: 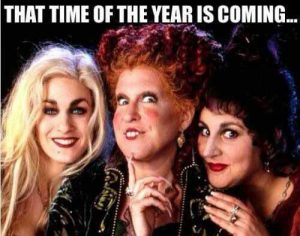 Yes! is that time of the year again!

Now, I recommend you 3 titles to get that orange spirit of the “year’s sunset” going with videogames! Because they’re such a beautiful and complete art form, these are sure to take you in deeper like anything else into autumn !

This is an obvious choice! It’s a videogame about halloween. In it, you take on the role of little kids who join forces to save the trick-or-treat day by wearing costumes and transforming into what they represent!

We’re all adults now, but one of the most important battles in life is to never loose the children we are within. This videgame not only captures perfectly this lovely (and “scary”) time of the year, but also makes you feel like a child again. Grab that controller, let go of your society-imposed adulthood and save Halloween!

Castlevania fans might want to kill me here for choosing this “debatable” entry on the franchise. But I didn’t choose it because “it’s a game about monsters and terror”. This particular videogame has one of the best ambience directions I’ve ever experienced. The art is fantastic beyond words. Often you forget you’re playing a videogame and gives you that intense feeling of immersion that very descriptive books such as Tolkien’s The Fellowship of the Ring gave. There are multiple scenarios you’ll visit as you advance. It’s always mostly night, sunset or a cloudy day in the gothic and dark, but beautiful, world of Lords of Shadows.

And yes, of course the victorian-inspired monsters will make you feel just at haunted-home for Halloween. Also, the deep acting for Sir Patrick Steward will give you “epic-chills” down your spine. That is, I think, the best description for this game: epic terror.

“Why?” you ask?. This perfectly crafted knock-off-evolution of Super Mario 64 is not a horror or autumn related videogame at first sight. But the fairy-tale like story with the mountain, the witch and magic is full of the escence of Halloween. And fits perfectly for awesome 90’s hardcore gaming sessions during these rainy days.

By the way, coming across this particular theme made me write this whole article in the first place!

So there you go! Wanna game now? take on these three very different titles and delve into the orange, weird and cozy season that autumn is!

This is a rare gem. Because Nintendo for once did what fans wanted: a dark, “realistic”, moody, gloomy and gritty Zelda game.

It’s earthy color palette and desaturation mixed with videogames’ most beloved franchise are going to give you an absolutely fantastic time this autumn. Enjoy it’s almost scary, epic trailer. With nowadays Zelda games being so light-hearted and colorful, it’s hard to imagine this once happened:

An intense creative who cannot stop doing what he loves.